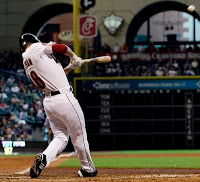 I had my blog post all ready to go...
Tim Linecum threw 7 shutout innings on opening day.
Barry Zito did the same.
And Matt Cain was one out from throwing 7 innings with no earned runs.

I was going to write about the Giants pitching staff and how the pressure is now on Jonathan Sanchez to keep the no earned runs off of the starting staff streak alive.

But with 2 outs in the 7th the Astros scored 2 runs on a triple by Cory Sullivan... no relation to me (I don't think he is at least.)

Instead the story became about Aaron Rowans and Edgar Renteria going a combined 9 for 11 in the top 2 spots in the lineup.

That's not bad. And if they keep up geting some runs and getting some pitching, this could be a fun fun year in San Francisco.

Of course I called my dad about the game.
He said "The Giants are either better than we thought or the Astros or worse than anyone thought."

True true true... but these are three games the Giants won't have to make up for later. 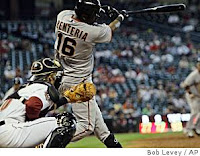