Have you been watching the Marlins/Reds series? 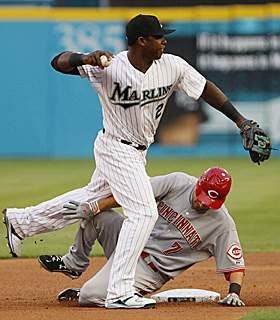 I am guess the the answer to that question is "no."

And listening to each of the games on my XM radio, I must say, I was riveted by the games.
They weren't the cleanest games ever played... but holy cow they were exciting.

First of all both teams are loaded with exciting young players. Of course the Marlins have Hanley Ramirez is an MVP contender. Dan Uggla is an All Star. Chris Coghlan is the defending NL Rookie of the Year. Jorge Cantu is on pace to drive in 100 runs by the end of the week!

The Reds have young players like Joey Votto and Brandon Phillips and Jay Bruce on their squad.

In the first game of the series, had lead changes, go ahead homers, game tying infield singles and a Houdini act by Nick Masset to escape a bases loaded 1 out game tied situation in the 9th. In the end Scott Rolen won the game with 2 homers and an RBI single in the 10th.

The second game saw the Reds take a 6-1 lead on a pair of three run shots... one by Johnny Gomes and one by Ryan Hanigan. The Marlins cut it to 1, thanks in part to RBI machine Jorge Cantu. The Reds tried to pull away but Cody Ross hit a 2 out, 3 run homer in the 8th to tie the game. In the 11th, Chris Coghlan made a spectacular game saving catch, only to see the Reds rally with 2 outs for the win.

Today's game continued the drama. Jorge Cantu homered, knocking in his 14th run of the season. He also is the first player in big league history to get a hit and an RBI in each of his team's first 9 games. Chris Volstad pitched a terrific game until Reds shortstop Paul Janish hit a three run homer to make it a 2 run game. Burke Badenhop pitched the last 2 innings for his first career save as the Marlins avoided the sweep.

Why am I writing about these games?
First of all because I don't want anyone accusing me of only caring about the Red Sox and Yankees.

The game is compelling... the game is fascinating... and it is on EVERY NIGHT.