The Frozen Series Could Happen 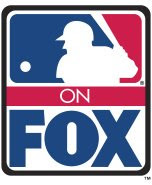 Think about this very plausible scenario for October and November.

It seems that a lot of people (including your pal Sully) are picking the Colorado Rockies to win the NL West.

And a whole mess of experts are picking the Minnesota Twins to win the AL Central.

Now if you make the playoffs, then by definition you have a shot to win the pennant (just ask the 2002 Angels, the 2003 Marlins, the 2006 Cardinals and the 2007 Rockies about being unlikely World Series participants.)

Think about that for a second... the Twins... the Rockies... two teams that won't exactly get the highest Nielsen Ratings in the world.

But one team plays in Denver... the other in Minneapolis.

Now imagine playing baseball in late October and early November in those cities... without a roof.

This is a picture taken of Coors Field, home of the Rockies.

Do you know when it was taken?

In MID October during the playoffs.

Meanwhile the Twins are now playing outdoors in Target Field. 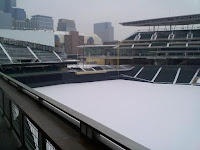 I'm not 100% sure when this pic was taken, but it isn't too much of a stretch to picture a day like this around Halloween in Minneapolis.

Part of me now wants a Rockies/Twins World Series.

Because Fox sends the casts of their shows to sit in choice seats during the World Series to cut to them (and promote their shows) during the game. When they are in New York, or Anaheim or even Boston, there's a little bit of charm to it.

I love the idea of the cast of Glee, Hell's Kitchen and Bones shivering under snow while watching Jeff Francis pitch to Joe Mauer.

"So we'll chat with American Idol's Kara DioGuardi... once we find her in the snow drift."

Admit it, you like seeing celebrities uncomfortable.
It's worth having the Rocks and Twinkies meet up.