Hey Indians! How about picking a cap? 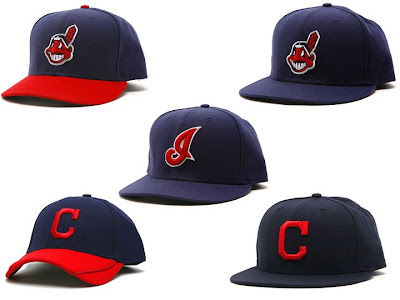 Look, I understand that marketing is king.
I understand the powers that be in MLB want to have baseball fans buying merchandise left and right... and if they bought a hat, they need to buy the alternate hat.

But could there be a LITTLE uniformity in the uniform?

It's mid April and the Indians have already worn 5 different hats in regular season games. And with three different logos.

I wouldn't be surprised if they changed hats midway through the game.

Couldn't they make their hat variations around a single logo?

And frankly I have issues with each logo. 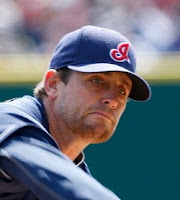 There's
THE CURSIVE UPPER CASE I

They seem to love this one as it also appears on some of their 48 different uniforms.

But I don't like it because when I see a letter on a hat, I think it means the name of the city.

The Pirates, not the Indians. It's all very confusing. I'd rather they dump this hat. 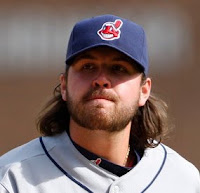 A reader named PJ commented on an earlier post I did on uniforms that my calling the Chief Wahoo logo racist meant that I had some white guilt. Later he questioned if I thought the University of North Dakota's mascot was racist.

And he so very lovely wrote "Stop being ignorant and get educated."

Thanks for the tip, PJ.

First of all, no. I don't think the University of North Dakota's Fighting Sioux nickname is racist. It is a regional name and those Sioux could fight. And the logo is a depiction of a warrior. So no... I don't find that to be racist.

I don't necessarily have a problem with the name "Indians" either. Supposedly they were called the Indians to honor former Cleveland star Louis Sockalexis.

The logo itself is a grotesque stereotype. It is a cartoony depiction of the Native American race... not a warrior picture like UND.

But let's give a better example of why I don't like this logo.
Let's say there was a team called the Ninjas or the Samurai and its logo was either a Ninja or a Samurai swinging a bat. That would be cool.

Let's say there was another team called The Orientals and THIS was their logo.
I can safely call that logo kinda sorta offensive. 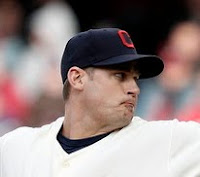 That's one way to deal with a politically incorrect hat. Take it down the route of a simple traditional cap.

It is kind of a dull hat. It could be any college baseball team's hat.

And it would be fine if it were an accurate representation of one of the Indian hats of their glory years... but I couldn't find an era of Indians history where they wore those caps.

They kind of resemble the hats from the 1920s, but not exactly. The hats they wore in the 40s, 50s and 60s resembled the Cincinnati Reds hats. So it seems unnecessarily dull.


There is a solution... one that can take Chief Wahoo off the cap, make people know it isn't an Indianapolis hat and harken back to an earlier day in Indians history.

Bring back the Tomahawk C hat!

That was the coolest hat the Indians ever had!

It kind of had that hard Tomahawk edge to it... had the Indians colors... wasn't boring... wasn't racist... and clearly was for Cleveland!

I wanted the Indians to cut back on their cap logos... and here I am demanding a 4th one.