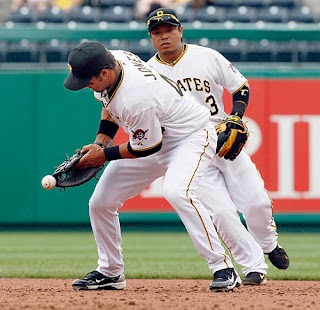 It's a school day... and the Pirates are playing a sloppy day game in the rain.
They are getting walloped.

And there are a few people (including some kids) sitting in the rain watching this.

And here's something to think about kids in Pittsburgh.

Any kid who was born the same year that Sid Bream slid across home plate, ending the Pirates pennant hopes in 1992 will turn 18 years old in 2010.

So unless you are a senior in high school, you can not be a kid in Pittsburgh and have a memory of the Pirates putting a .500 team on the field.

If you made it through all 9 innings of that GOD AWFUL display of baseball this afternoon, the Pirates management should make out a special pass for you.

The pass will have a specific bar code and require an ID when you use it again.

That pass will allow anyone who made it all the way through free access to any game at PNC Park in 2010.

Seriously... you made it through this one, the ticket takers will let you in.

Doesn't matter who it is or if it is sold out (which it won't be.)

And we're not talking about the Red Sox having a sell out streak and there's no seats available.

You should be able to sit in any empty seat... yes, even one RIGHT UP FRONT. If an usher gives you a hard time, just show the pass.

I'm not saying free beer or popcorn. The Pirates can make a few bucks that way.

But I'm serious... you deserve a pass for the season after today.
Who knows? The Pirates might develop a young fan or two along the way.

Why else would a young fan follow the Pirates?