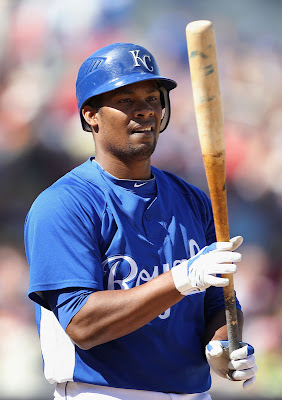 He already has 4 and looks locked in with some power and a .333 average to go with it.

Now at 34 years old, he is no spring chicken. This is his 14 season and he's played for 9 teams in the process.

And yeah, he has had some less than desirable incidents over his career. Remember how Mike Scioscia removed him from the playoff roster in 2004?

Remember how he was mentioned in the Mitchell Report?

Remember how he yanked his own toenail out by himself?

But what if he has a solid year as a right handed slugger? He's playing for a Royals team that isn't going anywhere this year.

But the Red Sox could use another bat.
The Yankees could have room in left field.
The Twins could use some right handed pop in their line up.
The Giants need a slugger.
Florida could always bring in some more pop.

And who knows what team will rack up key injuries?

I would say the Angels... but after 2004, I am guessing Scioscia will say thanks but no thanks.

I'm not saying the Royals could get one of the top prospect back for him... but they'd get more than if they just let him go without offering arbitration.

What I am saying is, keep hitting home runs, Jose.