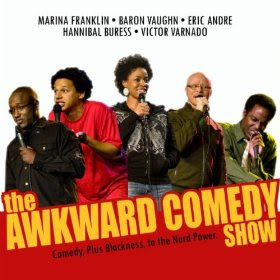 We take a break from baseball for just a moment to plug a great new special premiering tonight.

Set your DVRs for midnight tonight on Comedy Central for The Awkward Comedy Show.

It is the brainchild of Victor Varnado, a fantastic comedian and friend of your pal Sully. He’s from Minnesota and doesn’t give a damn about the Twins, but that’s neither here nor there.

He’s as funny a comic as I know and one of the best improvisers I have ever met… and is also a very talented filmmaker.

He produced and directed and performs in this concert film/documentary about 5 African American comics who defy stereotypes and preconceptions… and are all damn funny.

Marina Franklin, another long time friend of mine who has been on just about every TV show known to man performs in the film as well.

So do the very funny Eric Andre, Hannibal Buress and Baron Vaughn.

Check it out! It will be on after the games are over. So watch the highlights, check out how your fantasy baseball team fared and then catch The Awkward Comedy Show.

The Awkward Comedy Show from Victor Varnado on Vimeo.