Is Mariano Rivera the greatest reliever of all time?

Even though I am a Red Sox fan, I have given Rivera plenty of love on this blog.

I practically wrote a love letter to him last June.

Last November I said he should have been the World Series MVP over Hideki Matsui.

I also said he should have won the Babe Ruth Award over A-Rod.

I said he was what made the Yankees better than all the other playoff teams.

Now his place among relievers in history can be debatable. Certainly Rollie Fingers and Rich Gossage deserve a lot of praise (how many more saves would they have if they were one inning specialists instead of going 2 or 3 innings a save?)

But one thing is for certain... Rivera will soon be the All Time Save king.

Pirate Catcher Ryan Doumit is making sure of it.

Doumit has been a one man wrecking crew of Trevor Hoffman... the current All Time Saves leader.

He hit a 9th inning grand slam on Tuesday and a game tying homer yesterday to give Hoffman back to back blown saves.

It's early but it isn't THAT early. He's 42 years old. And despite a solid year last year, it isn't a stretch to say 42 year olds off to bad starts might not be in a slump. They might be out of gas.

And a team like the Brewers, who have a shot to win and a small window of opportunity to do it, can't afford a closer who lets up nearly a run and a half an inning.

Even Ken Macha, who no doubts respects the hell out of Hoffman, hinted that a change might be coming.

Which means his save total might finally stop piling up.

Up until this point, Rivera has been chasing a moving target. Now it will probably stay still with 62 saves between them.

He's not getting it this year... but he also has shown no signs of slowing down. Rivera already has 6 saves and an ERA of 0.00.

If Hoffman's closing days are over, Rivera should pass Hoffman sometime in 2011.

And the biggest case for Hoffman's Hall of Fame candidacy, being the All Time Saves leader, would be gone before he was even eligible for the vote.

I have nothing against Hoffman personally. He seems like a good charitable guy and his teammates don't have a bad word to say about him. But as I wrote before I think he is a smidge overrated.

A specialist like a closer needs to consistently come up big in the big game. Rivera certainly has. Hoffman has not.

Having the biggest save total of all time isn't like the Home Run crown, or getting 300 wins or 3,000 hits. It's not an automatic punched ticket to Cooperstown.

Jeff Reardon passed Rollie Fingers to be the All TIme Saves leader as a member of the 1992 Red Sox. Reardon is not a Hall of Famer.

Lee Smith passed Reardon. He's not in the Hall either.

When the two were teammates briefly with the 1990 Red Sox, it wasn't considered to be a meeting of All Time greats. 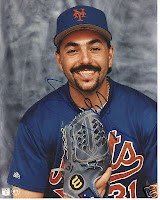 The fourth most saves in history belong to John Franco.

I don't think even the biggest Met fans I know consider him to be a Hall of Famer.

This isn't a slam on Franco, Reardon nor Smith. I was a fan of both. And Reardon actually DID have the great post season highlight of clinching a World Series (with the 1987 Twins.)

But neither were considered to be All Time Great difference making closers... like Gossage... or Fingers... or Eckersley... or Sutter... or even Hoyt Wilhelm.

They got a lot of saves for a lot of years and did so around the time that the closer became a one inning specialist. They stayed healthy for a long time and had solid careers... but did they change the dynamic of the game? Did managers manage differently knowing they were coming out of the pen like they do with Rivera?

I put Hoffman in the same category with Smith, Reardon and Franco... terrific career but as I wrote before, falls short of Cooperstown.

Saves are nice but not always a great barometer of greatness. Don't believe me?

But if saves are the short hand standard of a reliever's worth, it would be nice to see the All Time Saves leader be a Hall of Famer.

And when Mariano Rivera passes Trevor Hoffman some time next season, it will be so.