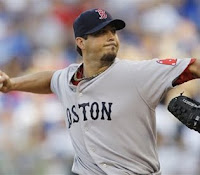 The final score looked like a comfortable win by the Sox... but make no mistake about it:

The dodged one last night, in more ways than one.

After Beckett's rocky opening day loss and on the heels of Friday's debacle and facing Greinke, the possibility of loss #4 in a row was not remote.

Then the Royals took the lead... and I saw they were playing their "Oh Christ, I got to get you SOME playing time" line up... and I thought "Oh boy, I hope we can get ANYTHING out of Hermedia, Varitek and Lowell."

Well how does a combined 3 homers and a dazzling play at third grab you?

And that STILL didn't help in the 7th for a double "Heart in your throat" moment.

Not only did the Royals cut it to one but a line drive by David DeJesus nicked Josh Beckett's head.

I can't be the only Red Sox fan who had images of Bryce Florie dancing in his head!
And Florie didn't JUST sign a $68 million extension!

But the Sox held on... and enough bullets and balls were dodged to add it to the column.

DODGED A BULLET GAMES - 2
April 4 - 9-7 win against Yankees (On Opening Night, the Red Sox overcome a 5-1 Yankee lead with a game tying HR by Pedroia and a go ahead passed ball.)
April 10 - 8-3 win against Kansas City (Beckett out pitches Zack Greinke and nearly gets decapitated by a line drive.)
TEETH GRINDER GAMES - 3

So far I have logged every single game.
It's going to be that kind of season, isn't it?