One of the best weekends for sports watching 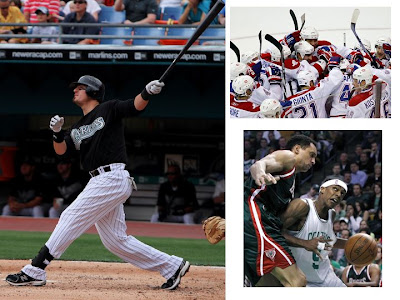 As a baseball fan first, no weekend for watching sports is better than that early October weekend when there can be as many as four playoff series going on at the same time.

But this weekend is right up there. You have the start of the Stanley Cup Playoffs (and my San Jose Sharks are trying to avoid a third straight year where finishing first in the Division meant an early playoff exit.)

You have the start of the NBA playoffs (where my Celtics hope they have one more good push in them and all of Cleveland is hoping that THIS is the year.)

And yes, you have some great baseball series.

Now before you roll your eyes and say "Sully... it's early" just remember these games count as much as the games in September down the stretch. And some wins this weekend could make September a little less stressful.

The Red Sox and Rays will be battling for a playoff spot at some point this year. They are squaring off this weekend in Fenway.

The Giants are off to a great start and they are off to Chavez Ravine to take on their rival Dodgers.

The Rangers have AL West title aspirations. Let's see if they can pass a test in the Bronx starting tonight.

The Marlins hope to contend for the division title. They can take a step towards that when they head to Philadelphia to take on the three time defending division Champs. Plus you have Jorge Cantu's strange streak of having an RBI and a hit in each of the first 10 games of the season... and he'll try to keep that streak alive against Roy Halladay no less.

There are good games on... and each win now is a win the team isn't scrambling for later.

So watch basketball and hockey to your hearts content. But check in to the baseball games... unless you are a Mets fan. Oliver Perez is on the mound. You may want to avert your eyes.