The Pirates nose dive is MY fault 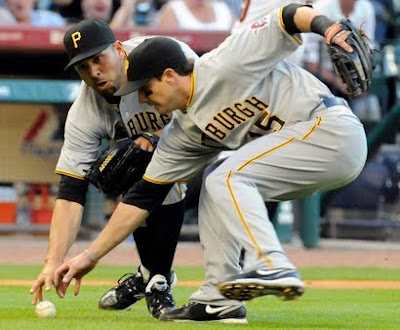 I am SO sorry, Pirate fans.

I was seriously just trying to be encouraging to the Pirates and their fans.

I’ve always had a soft spot in my heart for them and I saw, early in the season, that they swept the Reds.

And I noticed that they were 2 games above .500 and were playing exciting ball.

So I wrote about it... and man since then, the results have been pretty amazing.

And when a young team has some success early, they can go in three different directions:
1) They can have an exciting and unexpected season, like the Rays did in 2008.
2) They can quickly come back to Earth, like the Blue Jays did in 2009.
3) Or they can collapse so grotesquely that you can basically call the season over before May… like the 2010 Pirates just did.

They’ve lost 7 in a row.
And guess what?… THAT’S THE GOOD NEWS

They didn’t just lose these games. They crashed and burned in ways that the slaughter rule should have been in place.

In short they do not look like a major league team. Put them up against the New Orleans Zephyrs and I wouldn’t pick the Pirates.

Since I gave them a pat on the back the Pirates have an 0-7 record and have been outscored by a combined score of 72-11.

Look at that again… in their last 7 games, they’ve lost by an AVERAGE of roughly 10-1.

Better hope the Penguins have a good playoff push.
I have a feeling consecutive losing season #18 is a foregone conclusion.