I don't blame you, Josh 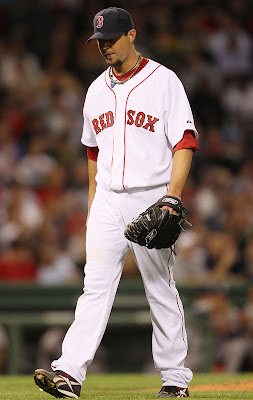 Josh Beckett and the Red Sox have been going back and forth on a contract extension.

The Sox gave John Lackey 5 years, so why not Beckett who has already delivered a World Series title and an ALCS MVP to the Red Sox?

Was Beckett going to be the latest in the "Ungraceful Exit Red Sox" team?

In Fenway that night as a commentator was one of those ungraceful exiters, Nomar Garciaparra... who had turned down a massive contract before the 2004 season... then had a subpar season... and then was traded away by the Sox... and NEVER saw a contract offer that big again.

Last night Beckett was no good. He didn't last 5 innings. He let up homers. He went too deep in the count with the Brett Gardners of the world.

Less than 24 hours after that game, Beckett said "Let me see that contract again!"

And lo and behold he signed it.

4 years... 5 years... if he has a sub par year then haggling over that last year will look awfully silly.