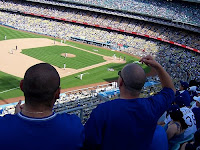 People always seem to complain that the media is too Red Sox/Yankees obsessed (even though they are the two most popular teams one practically the only teams that get any kind of national ratings.)

But if I weren't a Red Sox fan, I'd probably agree with them.

So let's take a look at the other match ups in big league baseball... you'll find there is reason to watch games in places other than the Bronx.

The "I Swear, we both won pennants in the last 5 years even though you probably forgot about them" Series.

The "Average Age Of Our Players Is 22" Series

The "I Swear This Used To Be A Heated Rivalry" Series

TEXAS vs. LOS ANGELES (Of Anaheim)

The "Can You Believe This Is A Match Up of SECOND PLACE Teams?" Series

The "Did we BOTH Really Think We Had A Shot Against The Angels?" Series

The "Can You Believe First Place Is On The Line?" Series


So there you have it... there are great series up and down the dial. So if you don't want to watch Red Sox/Yankees, flip around and quit yer belly aching.