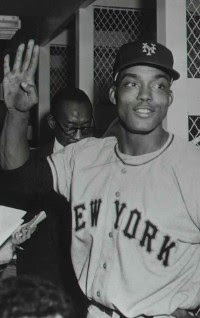 Yesterday the Giants announced that they were retiring Monte Irvin's #20. And thankfully, Monte is still alive and will be at the ceremony.

Chances are Monte Irvin’s number retirement in San Francisco will get some nice applause at AT&T Park and some heartfelt commentary from baseball experts and most baseball fans will have no clue who he is.

He never played a day as a member of the San Francisco Giants, so you can forgive their fans if they don't get worked up when #20 gets retired.

But if things had played out a little differently, #20 would already have been retired all over baseball.

No less of an authority than Cool Papa Bell thought that Monte Irvin was going to be the player to break the color barrier.

He certainly was a more established professional baseball player than Jackie Robinson was. As an outfielder for the Newark Eagles in the Negro Leagues, he was a five time All Star and batted over .400 in 1940. He also was the MVP of the Mexican League in 1942. 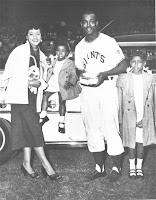 When Branch Rickey was looking for the right candidate to break the color barrier, he wanted more than a good ballplayer.

He wanted an upstanding human being and one who would be willing to take the punishment and respond not with their fists but with their play.

And oh yeah, he also wanted to make A LOT of money! 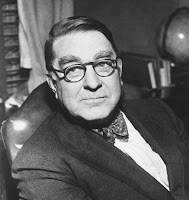 And supposedly Rickey approached Irvin to be part of his great experiment. Legend has it that Irvin didn't think he was ready to play at the Major League level so soon after leaving the service.

Rickey went with Robinson and Irvin would eventually join the Giants. Irvin led the National League in RBIs in 1951 when the Giants would over take the Dodgers behind Bobby Thomson's homer. He was also an All Star in 1952 and helped the Giants win the 1954 World Series, the last one the team has won to date.

He worked for the Mets and the Commissioners office after his retirement and became a member of the Hall of Fame in 1973, a year after Jackie Robinson's untimely death.

But imagine if he had said yes to Rickey.

Maybe it would have been Monte Irvin whose legacy we celebrate in breaking the color barrier.

Maybe school children would be taught to marvel at the dignity, talent and bravery of the great Monte Irvin. 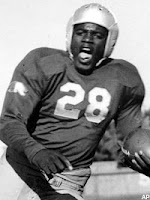 And chances are Jackie Robinson, not given the directive by Branch Rickey to curb his well known hot temper, may not have lasted long. Perhaps Jackie would be known as a former UCLA football star who briefly played in the majors.

Maybe Jackie would have joined his former UCLA football teammates Woody Strode and Kenny Washington as racial pioneers in the NFL.

People might say something like "What Monte Irvin was to baseball, Jackie Robinson was to the National Football League."


And maybe in 1997, on the 50th anniversary of the color barrier being broken, Bud Selig and Bill Clinton would have retired #20 all over baseball instead of #42.

We'll never know. But what we DO know is Monte Irvin deserves to have #20 retired.
And if you are at that game... stand up and applaud.

He had All Star stuff and the heart of a pioneer.