IT'S A MIRACLE! THE GIANTS BEAT THE PADRES! 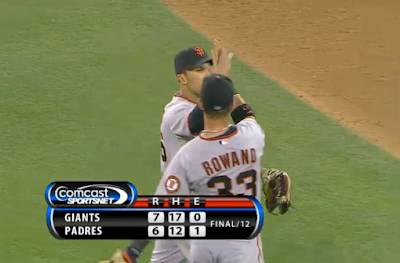 Forget the loaves and the fishes and turning water into wine.
This is a confirmed miracle!

The Giants are now 1-7 against the Padres... and after San Diego scored 2 in the bottom of the 12th and had the tying and winning runs on base, I think it is safe to say that EVERY SINGLE Giants fan on the planet Earth assumed they were losing this one as well.

So now comes a quandry... who do you root for if you are a Giants fan tomorrow?
If the Giants win and the Padres lose, the Giants will be in first place.

But that would mean rooting for the Dodgers, who are in a 9 game winning streak and only one game back in the loss column of The Padres and Giants.

These are tests of faith... but hey! Aren't miracles supposed to confirm your faith?