Dallas Braden's perfect game made me feel badly for someone... 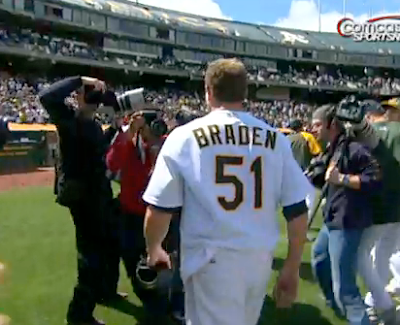 Somewhere in the world there is some shmuck to over thought his fantasy team and said "I'm not going to start Dallas Braden today. The Rays will knock him around."

Well, he now has a perfect game to go with his, as A-Rod called them, handful of wins. And guess what? With a perfect game under his belt, it will mean this whole silly "don't walk over the mound" insanity isn't going away.

But hey! Didn't I tell you to watch the A's/Rays series?

I do know there were 12,228 fans who saw it... but as the years go by there will be tens of thousands of people who will CLAIM to have been there.

The A's are an exciting team now. And they go into Texas for a series where they can get back into first place.

There have GOT to be more than 12,228 people who are interested now!

Either way, you had best not walk over Dallas Braden's mound.