The Third Place Angels have clinched the West 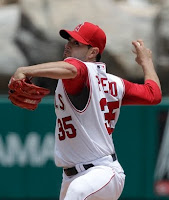 How can I look at a team that is currently in third place and sub .500 and say they are a lock for the post season?

They are in a division with the recently swept Rangers (who always fade in the summer when heat overtakes their pitching), the A's (who have dropped 5 in a row since taking a share of first place and have been playing above their heads all year) and the Mariners (whose clubhouse seems more tense and divisive than District 9).

If any one of those three teams went on a tear in the first month and a half of the season, I would say the Angels would be in trouble.

But none of them did. And now Mike Scioscia has shook up the line up and they have responded with a better offensive attack. And now their pitching is turning around.

Even Joe Saunders, a person I mocked last week, has started to show off the stuff that made him an All Star.

So it won't be long before the Angels emerge as the team from a mediocre pack. They could be the only team of this bunch to finish about .500 when all is said and done.

You missed your shot, AL West.