I know what you are doing, Tyler Clippard

You can fool most of the people, but you can't fool ole' Sully.

Clippard blew a save the other day but the Nationals rallied the next inning and he got the win.
Funny... he did the EXACT SAME THING the day before.

That's right, he got two wins this weekend, all the while posting a microscopic ERA (0.76) and batting average against (.158.)

And now he is being mentioned in some elite company this year. In this season that is filled with Cy Young contenders in the National League, guess which three pitchers are tied for the league lead in Wins?

Roy Halladay and Ubaldo Jimenez each have 6 as you would expect with their Cy Young caliber starts. But who also has 6?

That would be Tyler Clippard. 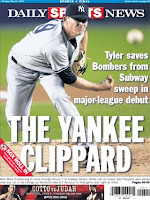 Going into this year the only thing I knew about Tyler Clippard was he won a game for the Yankees against the Mets in the Subway Series...

And that all of humanity was spared hearing John Sterling call him "The Yankee Clippard" for year after year.

But now here he is being the ultimate scavenger.

What if he has 14 more instances in the rest of the year like he did twice this weekend?

What if he becomes a 20 game winner? Does he get included in the Cy Young discussion?

So THAT'S his plan!

He wants to be a Cy Young contender because he's convinced all the voters just look at win totals. 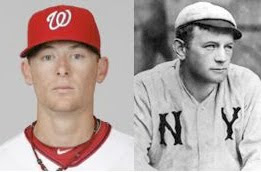 Then he will tie a once thought unbreakable record of 41 wins of Jack Chesbro who did it for the 1904 New York Highlanders (Now the Yankees.).
(Can you imagine winning 41 games in a season?)

Well the only way it ever could be broken is by a vulture reliever like Clippard... blowing games and then picking up the win with an inning of work... 42 times to the record book.

It's a brilliant plan.

I am on to you, Clippard.