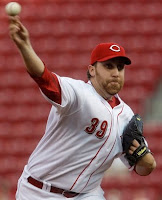 Your team is in first place in late May.

It’s still early but before you know it, it will be June… and it will be the time of year where teams that got good starts but are really mediocre are separated from the “Holy Cow, they might have a shot!” teams.

There’s a lot going in the Reds favor right now:

The Reds MUST go 4-2 in those 6 games… but seeing they are playing two teams in utter freefall and disarray, a 5-1 stretch isn’t out of the question.

Meanwhile the Cardinals, who sit on top of the standings with Cincy, are off to San Diego to play the division leading Padres… then off to Wrigley to play the Cubs.

And how do the Reds and Cardinals finish the merry little month of May?
With a head to head series.

The Cardinals have a harder schedule in the build up to the Memorial Day clash and if the chips (or cards if you will) fall where they may, the Reds could FINISH May up by a couple of games, looking to pad the lead with a series win in St. Louis.

In other words, Reds fans… watch the games. Something cool might be happening.