Something positive is happening in Boston 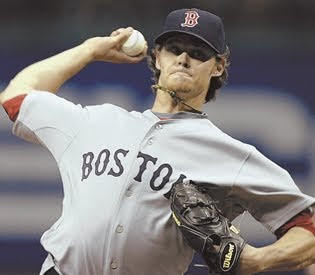 Boston fans... I know it has been a strange night, sports wise.
Paul Pierce couldn't get a shot off and the Eastern Conference still isn't clinched.

And the Flyers moving on to the Stanley Cup Finals is a grim reminder of two things:
1. A 3-0 lead isn't safe... don't get cocky, Celtics.
2. The Bruins would be playing in the Cup Final if they didn't finish the series 0-4.

But amidst the grimness, there is something potentially wonderful brewing.

Remember how we all dusted off our old copies of "Noose Making For Dummies" after Papelbon took a Seabiscuit sized dump in the bed last Monday?

The Sox are 5-1 since... they beat Mariano Rivera one night, Roy Halladay another. They got great starts from Buchholz, Wakes, Lester and a near no hitter from Dice-K.

Ellsbury is back and Ortiz has injected some of his old life into his swing.

And have they been beating tomato cans?

Nah... just the Defending World Champions, the defending Central Champs (who are currently in first place), the best team in the National League and the team off to the best start since the 2001 Seattle Mariners.

In other words this could have been a week that could have SUNK the Red Sox.

Instead they have been pitching, hitting and putting teams away early.

And while it is too early to be lining up playoff match ups, despite all the HORRIBLE baseball that the Red Sox have forced upon us in 2010... they are currently only 2 games out of a playoff spot.

There's lots of baseball left to be played, and teams that hit and pitch well tend to do well over the long haul.

Win the series in Tampa and then there are 4 games with KC at home.

Rest of the AL... can't you hear the Sox knocking?