I am watching the last few innings of the Padres and Dodgers game sitting on my couch. During the action in the 7th inning, Vin Scully announced that on Friday May 21st, the Dodgers are celebrating The Empire Strikes Back.

Fans get a poster for the 30th anniversary of the release.
The greatest moment was when Vin Scully said "Fans in 'My Town' will receive a DodgerTown T-Shirt featuring Boba Fett." 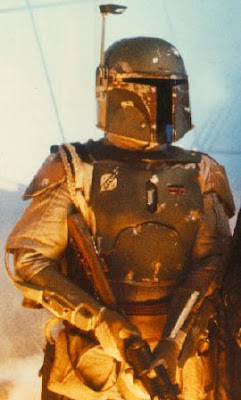 I have no clue if Vin Scully has any idea who Boba Fett is.

Frankly I don't care if he has any idea who Boba Fett is. He sold it when he pitched it and of course seemlessly went back to the play by play with Padres' infielder David Eckstein at the plate.

Having the great voice of Vin Scully mention The Empire Strikes Back is almost too many happy things from my childhood to experience at once.

If he finished off saying "And you get to have a Papa Gino's pizza with Batman" it would have been too much.

Don't take my word for it. Listen to Vin talk. I assume he once announced in a galaxy far... far away.