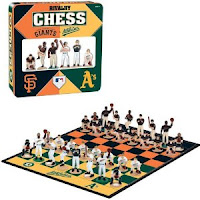 There is a potential power shift in the western divisions that could be heading north... and this week could be a big week in the Bay Area baseball wise.

Of course the only California team to win the World Series in that period was a southern California club, the Angels, who stunned my dad's Giants, but I digress.

And then, on Saturday October 2, 2004 it all came crashing down.

The Giants needed to win their last two games against the Dodgers to force a play in game for the Western Title. They took a 3-0 lead into the 9th knowing that a win would mean all they would have to do is win again on Sunday and there would be a winner take all Dodgers/Giants match up. Then the 9th inning became a bone crusher for Giants fans.

Dustin Hermansen could only get one out as he walked three and let up a single. Then shortstop Cody Ransom booted a grounder and Jayson Werth singled to tie the game. And finally Steve Finley hit a walk off, division clinching, Giants eliminating grand slam.

The A's went into the last weekend tied with the Angels and were hosting Anaheim (they played in Anaheim back then) for a three game set. They had Mulder, Zito and Hudson rested and ready to go and if they won two of the games, they would be the Division Champs.

Mulder got blown out of the first game but Zito pitched well on October 2nd as the A's took the lead into the 8th. If the A's could hold on, the last game on Sunday would be a winner takes the division de facto playoff game.

But the A's bullpen imploded as Darrin Erstad tied the game in the 8th with a double and Garret Anderson hit a 2 out RBI single to give the Angels the lead that they wouldn't give up.

Since then, the Western Divisions have been controlled by Southern California teams.

The Giants haven't made the playoffs since the Finley slam and the A's have only made it back once in 2006.

But now things are looking up in the north (and I am not just talking about my San Jose Sharks!)

The Giants could have the best starting rotation since Bobby Cox's Braves in the mid 1990s.

With a little help in the lineup and rotation, they could steal the division.

And this week they are playing the Padres three times... a team they trail by 1/2 a game. If they take two of three, the Giants will be in First Place by themselves.

And fresh off of Dallas Braden's perfect game, the A's find themselves in a big series in Arlington where they trail the Rangers by a single game.

If they take 2 of 3, they'll be tied for first. If they sweep, they'll be in first place all alone (of course the third game of this series won't be televised in Oakland... but that's another story.)

I know it is still relatively early in the year, but usually Memorial Day is when you start to see what teams are for real and which teams just had a decent April. And with the Padres overachieving and potentially ready for a collapse and the Dodgers a mess, the West is winnable for the Giants.

And you know the heat will wear down the Rangers pitchers, the Angels can't get out of their own way and the Mariners clubhouse is more tense than the island on Lost.

The Giants and the A's can do this. They can put October 2, 2004 WAY in their rear view mirror.

And the map to division titles could lead north again.