This Red Sox/Yankees series reminds me of Superman IV 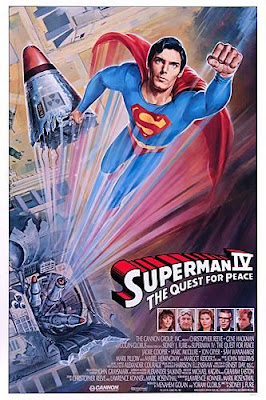 I know the Red Sox and the Yankees are playing each other tonight... and I am just not feeling it.

It clearly isn't because I haven't been following the season. Who else do you know who is keeping track of the close wins and loses like I do.

And it isn't because baseball doesn't interest me. But there's a going through the motions element of this Yankees/Red Sox series that just can't match the games of the past.

Yeah, a Red Sox win can help them climb up in the standings.
Yeah both teams have tons of stars and many players with World Series rings.

Do you remember that movie? Probably not... it was the tired, franchise killing, let's wring the last dime out of this series movie that came, went and was just dreadful.

Oh they tried to make Superman IV feel like the first two great ones. They got Gene Hackman back and went back to Smallville and the Fortress of Solitude. They tried to give Superman a bad guy who could match him and they dutifully played the John Williams music and had the credits over space.

Hell, there wasn't even a Miss Tessmacher or Otis. Even his smile to the camera at the end of the film is tired.

That's this series... yeah Big Papi is on one side and Jeter and A-Rod are on the other. Yeah there have been recent World Series titles on both sides...

But it feels tired. It doesn't have a sense of urgency.

Or maybe the problem is they slashed the budget, didn't rehire Richard Donner to direct it and had a lousy script is the problem.

Oh wait, that was the problem with Superman IV.

I told you I got the two confused.