This is the team we Red Sox fans will see this year... 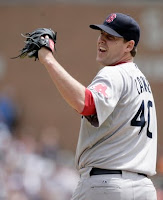 Saturday evening, I went to dinner with my kids, my wife and my mother in law.

At the time, the Red Sox had a 6-1 lead with Lester dealing. After the win on my birthday the night before, it looked like the Red Sox had the series win in hand and could go for the sweep before heading off to the Bronx.

Since then, the Tigers outscored the Red Sox 12-1 and took the series.

And sadly, I just shrugged.

That's this team. They are as of this writing a .500 team. They have won as many as they have lost. That is just about the definition of mediocrity.

Sure it is possible... a nice winning streak, maybe an injury or two on Tampa and suddenly 8 games in the loss column becomes 4.

Or a Red Sox losing streak puts them 10 back in the loss column.

Sure I get frustrated when the Sox don't win... I did the same when the Sox had losing seasons (remember those? They last had one in 1997.)

Until further notice, the Red Sox have a 50/50 chance at each game.

You are what your record says you are.