Seriously Giants... no rush in getting a new bat! 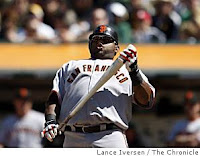 I mean there's nothing disturbing about what is going on.

Matt Cain threw a complete game where he let up no earned runs, let up 5 hits and 1 walk, holding the A's offense to a sacrifice fly for an unearned run in the third and that's it!

Naturally IT'S A LOSS!!!

Look Gio González is a nice pitcher and the White Sox were nutso to give him up for Nick Swisher... but come on! He's not the second coming of Walter Johnson. A Major League lineup should score... oh I don't know... TWO runs off of him?