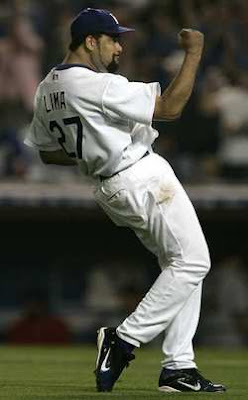 I remember when I was living in New York in October of 2004, everyone's attention come playoff time was squarely on the Red Sox and the Yankees during the Division Series and their inevitable rematch.

But I remember my friend, the comic Liam McEneaney (a big Mets fan), wrote to me while watching the less publicized Cardinals/Dodgers series. L.A. held off elimination thanks to a complete game shutout from their #3 starter... who sparked Liam to write to me "Who is this Dodgers pitcher? He is insane!"

Liam had his first experience with LIMA TIME!

Jose Lima had dubbed each of his appearances as "Lima Time!" and friends there was no pitcher more fun to watch... even when he got rocked (which was awesome.) 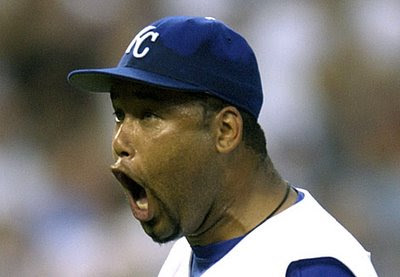 Lima passed away yesterday at the age of 37. And I am worried that with most people who die of a massive heart attack before their 40th birthday that there might be something unsavory about the story.

I sincerely hope there isn't and I will use this time to salute a player I always rooted for.

There was no denying that Lima was having fun and loving his life as a major leaguer. He was an outrageous extrovert on the mound, making faces flailing his arms and taunting the other team. He's the kind of guy you would hate on the other team... and secretly wish he was playing for your team.

That night in 2004 when he shut down the Cardinals and gave the Dodgers at least a moment of hope in October, he yelled from the mound, pounded Shawn Green after he hit his two homers and after manager Jim Tracy wisely for the sake of drama let him finish the game... give a flourish on the mound and he went on to hug everyone in a Dodger uniform and if given the chance, everyone in the left field pavilion as well!


When you really look at his career, he only had a handful of good seasons.
In 1998 he had a solid year for the Astros. In 1999 he became a Cy Young candidate, an All Star and 21 game winner.

Then in 2004 he had a comeback with the Dodgers where he started as a middle reliever but went 8-3 as a starter to finish the year and threw that magical shutout in the playoffs.

He had several truly awful seasons... twice he let up more runs than anyone in the league. He coughed up 48 homers in 2000. He would often finish the season with an ERA north of 6. But in the end it didn't matter... he was always fun to watch and there was a part of me that always rooted for Lima to win.

I guess in a way he was similar to Bill Lee and Mark Fidrych.

Both of them had a handful of brilliant seasons (the Bird only had 1 1/2 great seasons) but their personalities, humor and love for the game made them favorites of the fans and more beloved than other pitchers who may have compiled better numbers over the years.

He also took part in baseball clinics including one in Pasadena not far from my house.

I wonder if it was Lima.

He's worth a big salute.

He is now another player that I featured in my Home Grown vs. Acquired Astros team that has an aura of tragedy about him, along with Ken Caminiti, J. R. Richard, Don Wilson, Darryl Kile, Dave Smith and Jim Umbricht.

We need more nuts in baseball. 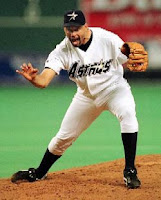