The Padres camouflage uniforms have GOT to go 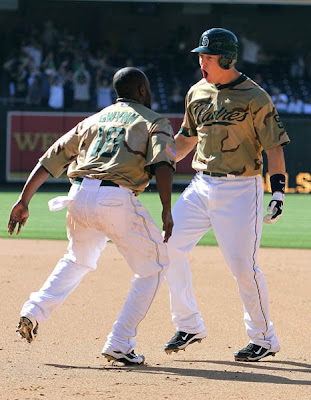 AUTHOR UPDATE: MAY 2, 2011
I wrote this post over a year ago. I know that tonight the Padres will wear the camouflage to honor the incredible work done by our men and women in uniform specifically regarding the assassination of Osama Bin Laden. As I wrote last night, I think this victory over Bin Laden is a great day for America and I think that the gesture made by the Padres is a tremendous one.

Please do not think I am trying to pull a John Steigerwald and make waves for attention.

All of that being said, I still think the uniforms are ugly.

Before you write in to me saying how insensitive I am and how unpatriotic I am, YES I realize the Padres wear camouflage uniforms to honor the military.

And I also know they do it several times a year, not just Memorial Day.

And I know San Diego is a military town and the Padres do A LOT for our brave men and women in uniform to whom we ALL owe a debt of gratitude.

I know all of that.

But guess what? Sometimes a nice gesture can still blow.
Ever get a lousy present from an earnest relative that was dreadful?
THESE uniforms are the ugly ties given to dads by sincere kids.

Why not have a military uniform that looks more like Naval attire? After all, San Diego is a big Navy town!

I'll say it... these uniforms suck.

They even suck as camouflage! Yeah, the tops will blend in... but how do the WHITE PANTS help you?

If you are going to do camouflage, take a page from the minor league team The American Defenders of New Hampshire.

Folks, they do camouflage and they go ALL THE WAY. 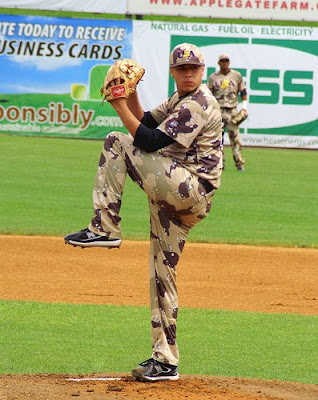