Brian Roberts injury is a warning to the Astros 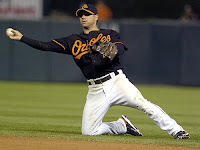 The Orioles have stunk for a while, and yet they have a solid all around All Star second baseman in the form of Brian Roberts. He was in trade rumors almost every day since he made the All Star team in 2005.

And the Orioles played footsie with lots of teams, including the Cubs whom he was rumored to be dealt to on an hourly basis.

Were they trying to keep him around and give Baltimore fans another “Oriole for life” in the infield a la Robinson or Ripken?

Were they trying to milk the other teams for as many prospects as possible?
Supposedly the White Sox were offering Gavin Floyd straight up for him but Baltimore wanted more.

Either way, Roberts is having back and abdominal issues and is on the 60 Day DL. You know what that means? It means his season is probably shot.

And the Orioles have an injured second baseman with a steroid history in his mid 30s making $10 million for the next three seasons.

A team that seems destined to hit 90 losses for their 5th straight season (and for the 8th time in the past 10 seasons) will have an albatross on their payroll.

What does this have to do with the Astros?

Well, I’ve been borderline begging them to deal Roy Oswalt before it is too late.
They have one of the best trade chips in all of baseball… a top starting pitcher who can be a legit #1 starter (or at least a fantastic #2 or #3 starter for a contender.)

A team in need of a jolt in fan interest, attendance and October revenue could make a big deal for Roy Oswalt and give the Astros and their depleted farm system a much needed replenishing.

Maybe it wouldn’t be the haul that the Blue Jays got for Roy Halladay or the Indians got for Cliff Lee… but they could get a few ready for the show pieces.

But don’t hold on to him too long!
If he gets hurt or too many teams fall out of it, they could be in the same position that the Orioles are in now…

Paying a lot of money for a guy who can’t contribute and can’t get any trade value in return.

Seriously… shop him around NOW!