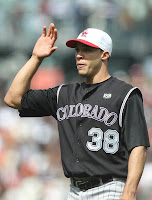 Folks... THAT is what you call a statement game.

Jimenez comes into AT&T Park against Lincecum, throws the complete game shutout, goes to 10-1 with a sickening ERA of 0.78.

4 wins a month for the rest of the season will get him at 26.

My friend, the brilliant writer Andres DuBouchet asked me if this was the best start to a season ever.

Fernando Valenzuela started the 1981 season with 8 complete game victories. He was 9-2 on June 1st, all 9 victories complete games with a 1.90 ERA. Pretty damn good.

I say Jimenez is better than both Pedro and Fernando. He calls home Coors Field, which is almost unfair.

One thing IS for certain: He is well on his way to the best regular season in Rockies history!


You get the point.
He's rewriting his own team's record book and throwing away the qualifier of adjusting his stats for Coors Field.

I am not sure it is the best start ever... but it's damn good.