A novel solution to those who think Interleague Schedules are unfair 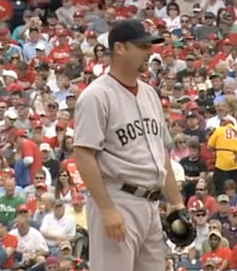 Awww... Poor Red Sox play the Phillies while the Rays get the lowly Astros.
Boo Hoo!

The match up of Tim Wakefield versus Roy Halladay looks like a mismatch?
It probably was, but when Wakes left the game after 8 innings, the score was 8-0 Red Sox and on the heels of Dice-K's near no-no, they are 5-1 since Papelbon's meltdown in the Bronx last Monday.

And now Wakes has 176 wins as a Red Sox and needs only 16 to catch Roger Clemens and Cy Young for most Red Sox wins all time.

Now they are off to Tampa to see if they can cut into their 9 game deficit in the loss column.

Will it be hard to do? Sure... but this is a pennant race, not a picnic and a ride on the Swan Boats! Stop whining and win some games!