The Francesa - Arroyo romance will continue

Reds starter Bronson Arroyo had a solid start today against the Pirates. He let up only one run while pitching into the 8th inning.

So get ready WFAN listeners. Mike Francesa will no doubt continue his bizarre infatuation with Arroyo.

For YEARS Francesa has been calling for the Yankees to acquire Arroyo. He talks about him like he is a no doubter... as if they'd be bringing in the second coming of Walter Johnson into a pennant race.

Even when his ERA is in the 5's, he wants him in the Bronx.
Yeah he's good for 200 innings a year, but so is Jon Garland and Francesa doesn't write Mike Francesa Garland on his notepad. But he does plan to take Arroyo's name. 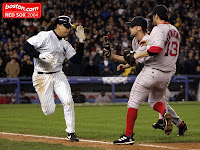 Maybe it is a whole 2004 ALCS thing.
He remembers A-Rod slapping the ball out of Arroyo's glove and he thinks that he wants yet ANOTHER '04 Red Sox idiot to wear pinstripes.


But none of that matters... Francesa wants Arroyo and his shutting down the Pirates (who Mike will call "underrated") will justify his lust.

Hey, how could Arroyo be worse than Javier Vazquez?
Just saying.