For now, the Cy Young race in the National League is much clearer 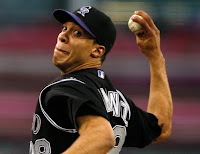 About a month ago, I had listed 12 potential Cy Young candidates in the National League as the award seemed like it was going to be loaded with possible winners.

It is a lot less cluttered now.

11 of the 12 pitchers have had a bump or two in the road since then. Even two of the three top contenders are coming off of a loss now. Roy Halladay was hit hard by the Red Sox over the weekend and last night Tim Lincecum was handed his first loss of the season.

And Ubaldo Jimenez keeps on dominating. His numbers are sickening at around the 1/3 mark of the season.

How good are they? Good enough to remove the "in Coors" qualifier to them. They would be good in ANY ballpark.

You like wins? He's got 9 of them.
You like win percentage? His winning percentage is .900! (His lone loss came in a 7 inning, 2 hit, 1 run, 1 walk effort in Dodger Stadium on May 9th.)
You like an innings eater? He averages more than 7 innings a start!
You like a dominating start? He threw the Rockies' first ever no hitter and in half of his starts, he's let up zero runs.

And those are just the categories he LEADS in.

There's about 2/3 of the season left and Halladay, Wainwright, Lincecum or someone else could dominate and win the prize.

But as of this posting, Jimenez has the lead.