The Buck (and the losing) stops here 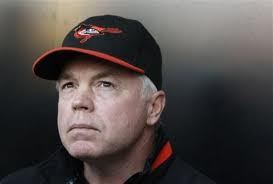 As a selfish Red Sox fan, I don't like what I am seeing in the American League East.

It used to be so simple... as recently as 2007 this was what playing in the AL East was like:

The Yankees... man they are tough. The Sox can play well against them, but it is always a dog fight and the season series is always close.

The Blue Jays... they have a few good players and can beat you if you are napping. Won't be a factor in August.

The Orioles... pathetic. They were once so proud. Now not only do they suck but that beautiful ballpark is empty except for the Red Sox fans who made the trip after doing the calculations that buying a train ticket to Baltimore and buying tickets at face value is cheaper than going to Fenway.

The Blue Jays are going to have a winning season... Tampa dropped the Devil and will be better than the Red Sox and playoff bound for the second time in three seasons...

And now the Orioles have shown pride playing under Buck Showalter. After tonight's win at Fenway, the O's, who were on pace for a 110+ loss season, are 28-17 under Buck.

Tonight's 7th inning rally may not have been the last nail in the coffin, but let's just say you should start buying a flower arrangement for the funeral home.

The old man is barely breathing but until the plug is pulled, I am updating the tally.

The Tragic Number is down to 7.
The Red Sox could be eliminated by the weekend...

But they aren't dead yet.