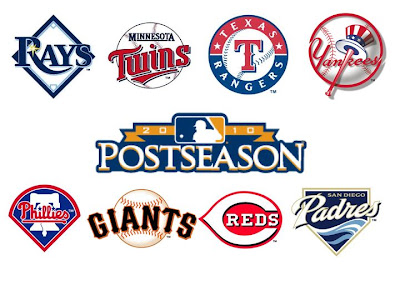 The playoff picture is a little clearer than it was yesterday...
Going into yesterday there would have been a one game playoff whose outcome would determine BOTH National League Division Series match ups... and Red Sox fans had some hope.

Well going into the final week of the season, three teams can clinch a playoff spot on Monday. Actually the Phillies already did clinch a spot today, but if they win tomorrow or the Braves lose tomorrow, it will be their 4th straight Division Title. (They have bigger fish to fry.)

If the Cardinals lose to the Pirates, then the Reds will be the NL Central Champs.

And if the Yankees win or the Red Sox lose, the Yankees will clinch at least a Wild Card spot. I have a feeling their celebration will be muted.

No doubt the Giants, Braves and Padres will continue to jockey for position. The Rockies will need a miracle. (Don't give them any ideas!)

Keep an eye on the Cubs/Padres series and the Marlins/Braves series. Both the Cubs and Marlins had bigger aspirations for the 2010 season. Will they relish the spoiler role?

The last week is always fun.