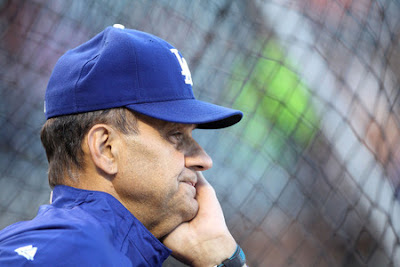 Seriously, what is the point for Joe Torre to stick around?
He seems more interested in discussing the Mets managerial position and showing up to Yankee Stadium than having a motivated team take the field in Chavez Ravine.

Don't believe me that this team is dead from the neck up?

Since August 27th, the Dodgers have lost 17 out of 23 games. They haven't won a single series since. The closest they came was splitting 4 meaningless games with the Astros.

And I live just a few minutes from Dodger Stadium and sadly watch more Dodger games than I care to admit.

They are lifeless.
They aren't even phoning in their game. They are leaving it on their outgoing message.

Save for a comeback win last Sunday, they don't just look like they have made their reservations but they look like they are already on their flights.

I know a lot of Giant fans are upset about how they have rolled over to San Diego (and tonight no doubt the Padres will sweep the Dodgers AGAIN) but actually you have to hand it to the Dodgers... they have been equal opportunity tomato cans.

They lie down to EVERYONE!

And since Joe Torre announced he was stepping down and handing the reigns over to Don Mattingly? They are 1-4. Only the come from behind Rockies win saved it from being a big fat 0-5 (and even THEN they got some help from the umps!)

In short, the Dodgers have done the impossible... they made the play on the field more disgraceful than the drama with the McCourt divorce!

Just step down NOW Joe. Maybe playing for Mattingly will give the team a little spark.
Maybe they'll play a little harder for a week.

Maybe there will be a little intensity.

Maybe Mattingly will learn how to fill out a lineup card and make mound visits.

The Dodgers have 3 more meaningful games left after today... 3 more with the Rockies.
Why not give the NL West a chance and have the Dodgers actually SHOW UP.

Step aside physically Joe. You already have mentally.