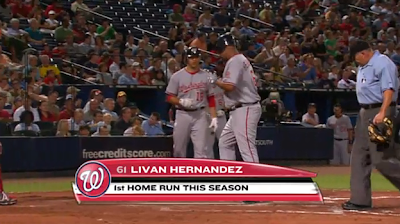 Hey Nationals Manager Jim Riggleman, I've got a bone to pick with you.
Livan Hernandez was pitching tonight and also hitting quite a bit.

It was a game against Atlanta so it has playoff ramifications for both the Wild Card and the NL East... just not for the Nationals.

The Nats don't have a lot to play for this year anymore. They are trying to avoid 90 losses and probably will reach that total anyway.

But don't blame Livan Hernandez. He's had a nice year (even if the win loss record isn't sterling) and tonight got an RBI double and a homer and threw 8 shutout innings for the win.

So why didn't you have him throw the 9th, Riggleman?
Seriously, was getting an inning of work for Sean Burnett so important that you couldn't let Hernandez get his third complete game of the year?

Don't you see how awesome the symmetry of that would be?
Livan Hernandez hits an RBI double, a homer and throws a complete game shutout. That is total domination of the opponent.

Instead it is merely a win.
Crazy managers don't know to humiliate the opponent when they have the chance.