The Red Sox trail the Yankees by a week of games... 7 to be exact.

There are 19 games left... and that is darn near impossible to make up that many games.

But have you noticed something?

The Yankees HAVE been losing a lot of games lately. They've lost games where Mariano Rivera has the lead in the 9th. They lost tonight when C.C. Sabathia pitched a masterpiece. They can't drive in a big run and they are playing solid teams who want to BEAT this Yankees team badly.

They play Tampa 6 more times in the next 10 days while the Sox play Seattle, Toronto and Baltimore.

And with A. J. Burnett, Dustin Moesley and Javier Vazquez pitching most of the games, Phil Hughes being almost shut down and Joba Chamberlain being as close to worthless as you can get... the Yankees pitching staff has to be considered average at best.

And the Red Sox pitching is looking better. Lester has won his last 4 starts and has 10+ strikeouts in each game. Maybe they can get on a roll.

You telling me the Red Sox can't cut it to from 7 to 5 games in that stretch?

Let's say the Red Sox get it down to 5 games by September 24th.
Guess what?
The Red Sox and Yankees will be playing each other.

The Red Sox and Yankees will finish the season against each other for 3 games at Fenway Park.

You telling me there's NO hope? NO New York team can blow a 7 game this late? 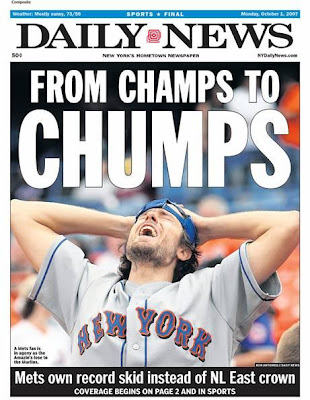