Is there an East Coast Bias in Awards voting? 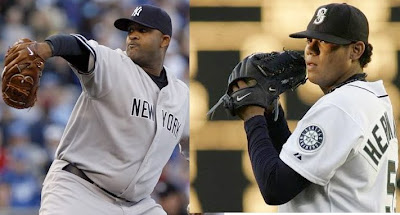 I've been supporting Felix Hernandez as the Cy Young winner even though I think voters will vote for C. C. Sabathia and his 20 wins (even though King Felix has him beat in every other category.)

But some people, including the good folks at Emerald City Diamond Gems, think that the fact that Sabathia plays in New York will tip the scales his way.

I've heard this before... the votes ALWAYS slant towards New York and Boston and to a degree Philadelphia... and stars in the west tend to get ignored come award time.

This is a terrific theory. It sounds correct.
And it is repeated each year by some writer in the west as if it is a fact.

Here's the problem with that theory:
It's not true. 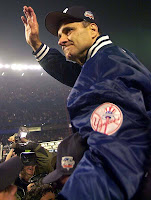 The Joe Torre era in New York.
1996-2007. A 12 year span where the Yankees dominated media coverage, made the playoffs all 12 seasons, won 6 pennants and 4 World Series titles and seemed to have every star in the galaxy.

How many MVPs do you think they had in those 12 years?

Do you know what team had as many MVPs as the Yankees during the Torre years?
The Mariners.

In fact what division do you think DOMINATED the AL MVP category during the Joe Torre Yankee years?

I'll give you a hint... none of the teams played in the Eastern Time Zone.

In fact it is interesting when you break those awards down how the East Coast bias did NOT work. When the great shortstop era was played out in the late 1990s and early 2000s, it wasn't New York's Derek Jeter nor Boston's Nomar Garciaparra who won an MVP despite putting up the best numbers of their careers.

A-Rod won his with Texas and Miguel Tejada, arguably the least known of the big shortstops of that era, won his.

And there have been two instances in the past few years where players from the Minnesota Twins, not exactly a media hub for anyone except Ted Baxter, won close MVPs votes over Derek Jeter.

I am going out on a limb to say that Derek Jeter gets more media attention than Justin Morneau or Joe Mauer.

Let's take a look at the Cy Young voting since the divisions expanded from 4 to 6 (1994 to present.)

With all the great Yankee pitching over the years, how many Cy Youngs do you think have gone the Yankees way?

Out of 16 Cy Youngs handed out, a grand total of one was given to a Yankee in that time.
Roger Clemens in 2001.

Which team has won the most Cy Young Awards in the AL since 1994?

That would be the Toronto Blue Jays with 4...

And remember Hentgen beat out the Yankees ace Andy Pettitte and Clemens beat out David Wells when he was lights out for the World Champs in 1998?


Now of course there IS an East Bias in coverage.
I wrote about that earlier.

And there's a reason for that... the most popular teams are on the East Coast and there are more transplanted New Englanders, New Yorkers and Philadelphians than there are transplants from California and Arizona.

I'm a case in point. I live in California and am a rabid Red Sox fan... even though I haven't lived in Massachusetts since Ronald Reagan was President.

Oh yeah, also the teams in the Northeast have won the last 3 World Series.

But that is media coverage... not awards bias.

So yes... Sabathia could indeed win the Cy Young for an irrational reason.
But that reason is numerical (20 wins) NOT geographical.