Suck it up, Giants fans... this is your friend now 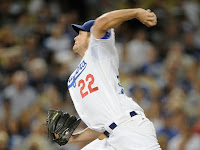 Remember how crappy it felt, Giants fans, when the Hum Babies lost a game despite letting up only one hit this week?

Remember how you ground your teeth to the gums knowing the Giants couldn't get a run off of Clayton Kershaw?

Well guess what? He's your best friend in the world now. Turn off all instincts of rooting against Los Angeles and supress any memories you have of the 1 hit loss.

Kershaw is following up his complete game shut out tomorrow with a game against Colorado... a team that is a more destructive freight train than anything Leonardo DiCaprio could subconsciously conjure in Inception.

The Giants need to be rooting with all of their heart for Kershaw to shut down the Rockies and to see the Dodgers show ANYTHING resembling heart.

It's time to be a Dodger fan, Giants fans... it may taste bad, but so does playing golf on October 5.