I guess I have to address the Derek Cheater incident 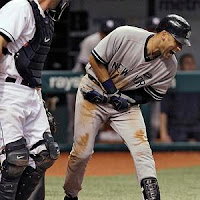 Derek Jeter did the whole Caddyshack "Ow my arm" routine a few days ago and frankly I didn't give a damn.

Yeah, I thought it was kind of silly but all I cared about was the Yankees lost the game.

Of course if the Yankees WON the game (and they took the lead after Granderson's homer) I would probably be a little P.O.ed, but I saw it as karma.

But man, if you read my e mail box, you would have thought I was Walter Cronkite not giving his opinions about the moon landing.

I only have 3 thoughts on the subject:

1 - JETER SHOWS THE ADVANTAGE OF HAVING GOOD WILL IN THE BANK.
Take note, Colby Rasmus, who thinks he is already good enough to be making waves in St. Louis. If you act like a pro for 16 years and do everything right, you can get a pass when you do something kind of Bush League.

The great Lisa Swan pointed out the double standard between how Jeter has been treated in this situation and how A-Rod was treated on things like yelling "HA!" or slapping Arroyo's glove in the 2004 ALCS.

Imagine if Manny Ramirez, Milton Bradley, Miguel Cabrera or A. J. Pierzynski tried to pull this off.

2 - INSTANT REPLAY ANYONE?
We ALL saw almost instantly (and while Joe Maddon was still arguing) that the ball hit the bat. It wasn't a matter of opinion... it was a matter of fact. EVERYONE on the planet Earth could see what the correct call was, except the people who actually make the calls.

Folks, this could have been all taken care of in one minute with zero controversy.

But of course that would make too much sense. We CAN'T have that!
(Insanity).

3 - THIS IS A REFRESHING CONTROVERSY
It wasn't that long ago that when people called out cheaters, it was because they were injecting hormones designed for horses into their buttocks.

This is more fun. It's silly and in the end harmless. There will be no Senate panels and parents of dead kids saying "My son pretending to be hit like a pitch like Derek Jeter... AND NOW HE'S DEAD!"

And it goes to something I wrote before... cheating will ALWAYS be tolerated in baseball. People will just have trouble with things that are against the law.

That's all I got.
Back to baseball.