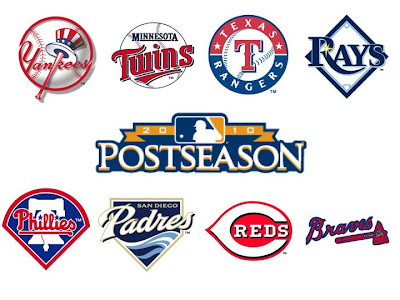 It's that time of the year when there is no longer any need for analysis. Games are played and you never know what pitching match up will fall apart.

Just ask Ubaldo Jimenez, who lost his shot at a 20th win and probably took himself out of the Cy Young race by getting clobbered by the Diamondbacks... not exactly a powerhouse.

It's also a crazy time where one minute the Padres are on the outside looking in and the next they are in line for home field advantage in the Division Series.

Chances are there will be some scrambling tomorrow night... especially as Atlanta saw their Division Title dreams get smashed and now lead the Giants by 1/2 a game for the Wild Card. we might see some one game playoff scenarios at this time tomorrow.

Instead, let's look at the current match ups.

The National League should be called "The Phillies and the other three teams."

We're going into the last 10 games. Things are ALREADY interesting.