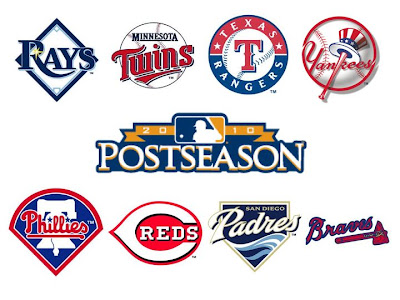 The playoff picture is confusing and jumbled and seems to be changing by the hour. And trust me it will look different EVERY morning.

So the staff here at Sully Baseball has decided to list the current playoff match ups every morning.

Blink and it will change. The American League teams are pretty much set. The Twins win last night over the White Sox all but did them in and the Rangers' Magic Number is now in single digits.

But the Yankees and Rays seemed destined to flip flop the top spot in the AL and the Wild Card until the end of the year... and the Twins and Rangers probably won't know their opponent until the season wraps up.

(And keep in mind Minnesota is only a game back in the loss column for the best record in the AL... they could have the home field when all is said and done.)

While the AL jockey's for position, the NL has only one no brainer... the Reds and their 7 game in the loss column lead over St. Louis. Cincy's magic number is 10 and they should take care of business soon.

After that, who knows? The Phillies have a 3 game lead but that could evaporate. And the current match ups include two former front runners who have been slumping but as of this writing are hanging on for dear life.

Right now the Giants and the Rockies are on the outside looking in... but they could BOTH be playing in October if they don't break their pace.

So here are the match ups as of right now...

That will probably change while you are reading this.