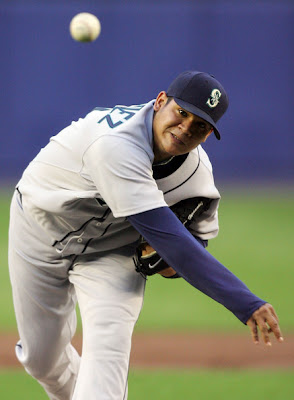 I heard the panel on MLB last night talk about the American League Cy Young Award today and they unanimously picked C. C. Sabathia, mainly based on his 20 wins.

John Hart said that Felix Hernandez had the great numbers but his win total wasn't enough.

I don't claim to know more about baseball than John Hart nor the panel.
That being said, that is "smearing feces on the wall crazy."

And yesterday's game is a case in point.
Hernandez let up one run in the first inning... the 50th home run of the season by Jose Bautista.
That was the only blemish. He pitched a complete game, retiring 13 in a row at one point. He let up only one other hit besides the Bautista homer, walked 4 and faced 28 batters in 8 innings for the complete game.

He got the loss. So in John Hart's mind, 8 innings, 1 run and 2 hits is a performance that shows he is NOT worthy of a Cy Young.

Here are the categories where Sabathia finishes ahead of Hernandez
(and he leads the league in the bold categories:)

I don't even know what half of those stats mean for Hernandez... all I know he has pitched better all season. Was he supposed to throw more innings? Let up fewer runs? Strike out more batters? Nobody did ANY of those better than Hernandez! 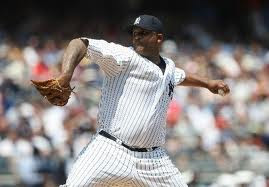 I am not disrespecting Sabathia who is having a wonderful season. And I understand he has a role of the horse of the Yankee staff and has to shoulder the innings burden of a shaky rotation.
But keep in mind that 10 of his 20 wins have been against Baltimore, Seattle and Kansas City.

Nor am I putting down David Price who should finish in the top 3 in the Cy Young vote with Sabathia and Hernandez.
But both of them have All Stars in their line up and bullpen. I covered in an earlier post that with a team this bad, 12 wins IS an accomplishment!
And guess what? He is 3-0 against the Yankees.
In Hernandez's 12 losses, his team has scored a GRAND TOTAL of 14 runs.
Nice support.
I can go through Hernandez's line up that he had today... the fact that the number 3 hitter is a .236 batter and the clean up hitter is below the Mendoza line... but keep this in mind.

In a one run game they pinch hit for the #5 hitter.

Would the Yankees say "It's late in a close game. Send in someone to bat for Robinson Cano"?

If not, then just automatically award the Cy Young to the guy with the most wins.