It's always dopey in Philadelphia 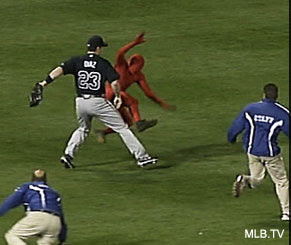 I'm going to get the disclaimers out of the way early here.
I like the Phillies. I think they are a cool team made of some good home grown stars and I think the mini pseudo dynasty that they are creating s good for baseball.

I got that out of the way.

Now I can say WHAT THE F***?
Again with another crazy Phillies fans during a game?

Seriously when I heard there was a crazy mishap on the field with a fan, just out of instinct I said "Philadelphia."

I know it is a few bad apples... but seriously how many bad apples are there?

As a Red Sox fan I am glad Philadelphia is taking the title of "Northeastern Fan Base with a New York complex whose fans are bat sh*t crazy" away from us. But between the tazer guy, the dude vomiting on the girl and this guy who looks (and evidently SEES) like Daredevil... it's starting to get harder and harder for Philly fans to defend themselves.

I say embrace it.
Say "Yes! We are a bunch of Cheesesteak eating lunatics and you never know when one of us is going to do something that will be the shame of our parents for all time... assuming that our parents aren't on the field with us."

Why not be like Raider fans? They embraced their idiocy by essentially dressing like the band Gwar.

These days that's all the Raiders HAVE.

Look at this guy. He's a grown up. He might even have a job. And he is embracing his stupidity.

Or maybe like the guys who dress up as dogs. Some of those guys are FATHERS.

So if you are going to be thought of as nuts (and you ARE) then why go half way?

Just don't be surprised if you get tazed.