Is it worth 52 seconds to get a call right? 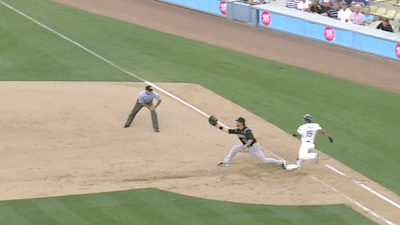 In the 11th inning of yesterday's Dodgers/Rockies game, Rafael Furcal grounded into what looked like a double play but was called safe.

Jim Tracy came out to argue and less than a minute after the play was made, the instant replay showed that Furcal was indeed out.

It was 52 seconds.
All the people screaming "it will slow down the game" need to answer to this.

Less than a minute later we saw the call was blown.
Furcal came around to scoring the game winning run.

The Rockies are now 1 game back in the loss column for the NL West lead and every game counts.

Now granted, if the Rockies REALLY want to blame someone, blame themselves for not holding onto a 6-0 lead against a dormant Dodgers team.

That being said... we're going to have the playoffs starting soon and more and more we are seeing that we have the technology to GET CALLS RIGHT for all time.

Once again, the need to instant replay shows itself.

I think 52 seconds is a fair amount of time to spend to make sure the right team wins the game.