Anticlimax at the clincher 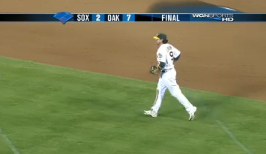 The Minnesota Twins clinched the American League Central Division tonight. The moment it happened the crowd was... indifferent.

And the players on the field... shook hands and quietly walked off the field.

Because the Twins weren't playing when they clinched the Division. They had already come from behind against Cleveland to win their came and cut the magic number to 1.

And the A's were beating up the White Sox. So when the White Sox lost and the Twins clinched, it was in Oakland... in a stadium so empty it looked like one of those high school championship games that are played in a big league stadium and about 300 friends and families.

I was hoping the White Sox would win. Not that I felt they had a shot... but the Twins are playing a day game tomorrow. Wouldn't that have been a sight! The Twins, now in an open air stadium, celebrating a Division Title in the sun.

Instead we had them watching the TV and cheering there.
Such an anti climax. There should be that euphoric moment on the field of "Yes! This season will be remembered!" instead of 8 guys in Oakland walking back to their car.

I remember in 1988 when the Red Sox clinched the Division, they backed into it because of a Tigers loss. Evidently they ordered pizzas. That's how we celebrated little league wins, not a Division Title.

Let's hope the other clinchers are a little more exciting.