It's your move, Giants 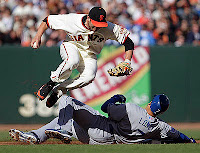 In a very twisted way, I felt the Padres victory over the Rockies last night was the best thing to happen to the Giants.

The Rockies were on fire on their 10 game winning streak and closing in on both the Giants and the Padres for the NL West.

Now of course if the Rockies had won, the Giants would be in first place by themselves going into tonight's game with Los Angeles.

I am less concerned with where the Giants are on September 14th than where they will be on October 3rd.

And I would rather have the Giants going toe to toe with a wobbly Padres team than a confident "remembering 2007 and 2009" Rockies team. Call me crazy.

I also want that last weekend between the Giants and Padres to be for all the tuna fish.
I don't want any scoreboard watching or have BOTH teams fall short.

So the Padres won last night.
The Giants are playing the Dodgers for the last 3 times of the season.

Focus on winning... and know there is also a series head to head with Colorado as well.

Worst case scenario if you win? You'll be a game out in the loss column.