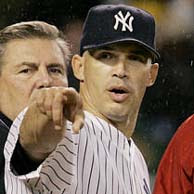 Hey Joe Girardi… take a good long look at what has happened to the legacy of Joe Torre. Only Joe McCarthy and Casey Stengel had ever managed three straight World Series winners before Torre and he brought class and dignity to the Yankee clubhouse along with his titles.

And today he is being portrayed as a manipulator, a man with a tarnished legacy and even those are questioning whether he belongs in Cooperstown.

His very rings are being questioned since he couldn’t win a pennant in Atlanta nor in Los Angeles (not to mention with the Mets or Cardinals.)

Now imagine if Joe had left the Yankees after the 2001 season…
He would have been the greatest New Yorker since LaGuardia.

Imagine if he had left after the 2003 World Series…
He would have won 6 pennants in his 8 years and maintained superiority over Boston.

Imagine if he had left after the 2005 playoffs (when EVERYONE thought he was going to.)
Yeah the collapse of 2004 would have hung over his head, but the perception would have been George and company were meddling and undermining him.

Instead it ended after 2007… when with more control he couldn’t make it out of the Division Series, lost the respect of his superstar and left town co authoring a petty (albeit fun) book.

Learn from Mr. Torre. If the Yankees win the 2010 World Series title… BOLT TOWN!
Seriously… don’t wait around for your Yankee legacy to deteriorate.

You’ve shown you could manage when you took the 2006 Marlins team with a payroll under $30 million and kept them in the running for the Wild Card into September. You won a Manager of the Year award. You can do it.

Go home to Chicago. If you win the World Series there, do you know how you will be treated?

Me neither! NOBODY knows. The team hasn’t won it since the series was called the World’s Championship Series and it was still an experiment. Win in Chicago and your ticket to the Hall of Fame will already be punched.

Have some other poor shmuck take over the Yankees and deal with this nonsense.