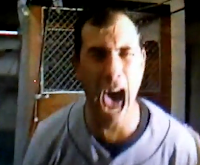 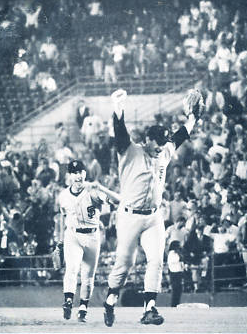 23 years ago today, a great moment happened in San Francisco Giants history... and I would be remiss if I didn't pay tribute to it.

In 1987, my family moved from the Boston area to the San Francisco Bay Area. I was still smarting from the 1986 World Series when I saw my new local team make an unlikely trip to the post season.

The Giants (or the "Hum Babies" based on manager Roger Craig's inexplicable expression) were far behind the Reds for most of the season. But like most of the Reds teams managed by Pete Rose, they faded down the stretch.

And the Giants made a slew of trades with the Pirates and Padres to remake their team in midseason. In came Dave Dravecky, Rick Reuschel, Don Robinson, Kevin Mitchell and Craig Lefferts to join the squad.

When my family arrived in the Bay Area in the first week of August, the Giants were in third place with a sub .500 record. They went 37-17 the rest of the way. Coincidence? OK, yes.

Then on September 28th, after many near misses over the years, the Giants played the Padres and had a chance to do what they hadn't done since 1971... make the post season.

I remember watching the game from our new home in Palo Alto. I remember it being an incredibly exciting moment for the Bay Area. And looking back at the box score, it had an amazing cast of characters and some strategy that shows how baseball has changed since 1987.

Take a look at the Box Score here and let's reminiscence.

HOW DEEP WAS THE GIANTS OUTFIELD?

They started Mike Aldrete, Candy Maldonado and Eddie Milner and was able to bring both Jeffrey Leonard and Chili Davis off the bench.

I remember that Giants team had about 4,000 veterans on their last legs who played as part time players. The Joel Youngbloods, Chris Speiers, Harry Spilmans and Eddie Milners of the world all contributed.

By the way, neither Leonard nor Davis started but each homered. 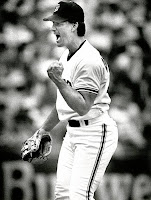 HOW GREAT WAS THAT DEAL WITH SAN DIEGO?

Maybe it was appropriate that the Giants clinched in San Diego with Dave Dravecky pitching.

It was the deal that brought over Dravecky, Mitchell and Lefferts that turned the season around.

How good a deal was it? The Giants gave up Mark Davis who would go on to win a Cy Young with San Diego... and the Giants STILL got the better part of the deal!

COULD THE PADRES LINE UP BE FILLED WITH MORE OVERHYPED BUSTS?

Anyone who stockpiled rookie cards during the 1980s must look at this lineup and cringe.

None of them lived up to the hype... and those baseball cards should have been put directly into bicycle spokes.

In the 4th inning, Bruce Bochy came up as a pinch hitter for the Padres.

He struck out to Dravecky.

Now he is guiding the Giants to finish what they started in 1987.

BULLPEN STRATEGY WAS A LITTLE DIFFERENT IN 1987

Can you IMAGINE that now? I think it takes Special Dispensation from the Pope to bring in a closer before the 9th inning and an executive order from the White House to have them pitch more than 1 inning.

Just imagine Bochy bringing in Wilson in the 4th inning of a 1 run game today. 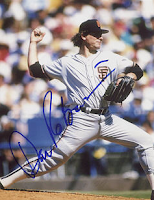 LET'S JUST SAY ROGER CRAIG HAD FAITH IN THE CAVEMAN

OK, if bringing Robinson into the game in the 4th wasn't crazy enough for 21st Century baseball fans, try THIS on for size!

In the 8th inning of a potential clinching game, and his top reliever already pitched 3 innings, and the game tied with the pitcher's spot coming up... what do you think Roger Craig did?

I guess no Joba rules for Robinson. Can you IMAGINE that happening today? A manager would be fired ON THE SPOT! In MID GAME for doing that!

Do what did Robinson do?
He hit a home run... and it turned out to be the game winner.

Svelte Padres outfielder John Kruk hit a flyball to the warning track that was ALMOST a walk off come from behind homer... instead Hac Man Leonard caught it at the wall and Giants fans could do something they couldn't do since Willie Mays, Willie McCovey, Juan Marichal and Gaylord Perry were on the team... celebrate a title.

Most people on camera in a locker room celebration say things like "It was a team effort" and "this feels great but we're looking for to the playoffs."

Not Will Clark. He was screaming, dropping F bombs and doing what everyone must FEEL about their first post season berth.

I remember he had to apologize for his language. Come on... he was just doing and saying what every Giants fan was feeling.

The Giants almost made it to the World Series, falling a game short against a banged up Cardinals team.

But lest we forget, this was the day that San Francisco remembered how to field a playoff team.

Enjoy the entire clinching... Will Clark's celebration starts at 6:45.