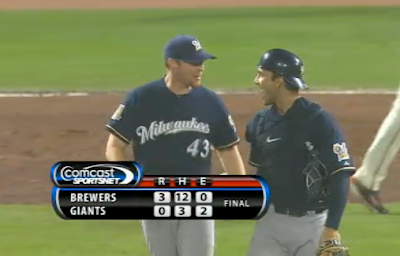 Yeah the magic number went down because the Padres are continuing their Wile E. Coyote impersonation and the Reds also lost...

And you have to tip your cap to Randy Wolf and the Brewers for a well pitched complete game shut out...

But there are only 15 games left. There's not a lot of time for cap tipping.

And guess what? The Rockies won again. The Dodgers clearly aren't going to be much of a help for the Giants in terms of beating contenders. This team is mailing it in and wondering who else is going out the door with Joe Torre.

1 game in the loss column separates the Giants, Padres and Rockies.

Lincecum takes the mound tomorrow.
Keep your cap on your head and let other teams tip THEIRS!